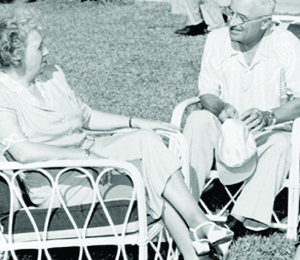 History US Presidents and Key West

Key West is one of Florida's most unique and interesting historic towns, having been an important spot for trade industries and the US military. The island was actually once considered Florida's most populous and richest city. The island's convenient location between the Gulf of Mexico and the Atlantic Ocean as well as on important trade routes to New Orleans, the Caribbean, and the US east coast have contributed to the large population on the tiny island. The laid-back island feel mixed with gorgeous historic mansions lining quaint narrow streets have made Key West into one of the top vacation destinations in the country. Many people for many decades have discovered the charm of this southernmost tropical island including authors like Ernest Hemingway and Tennessee Williams and US presidents such as Truman, Roosevelt and Eisenhower.

President Harry S Truman is by far the most well-known US president who was a huge Key West fan. During his presidency he made 11 visitors to the island and spent a total of 175 days on vacation in the US government's family house on Key West. That house was nicknamed President Truman's Little White House in honor of the president who spent most of his vacation time in it during the late 40's and early 50's. Even after his presidency, Harry Truman made five visits to the island of Key West Florida. Thanks to advances in technology the president was able to get plenty of work done while in Key West, which is what lead him to nickname the property The White House. In fact, many times while in Key West he called his team for meetings at the house as well as fishing trips and poker nights. Key West renamed one of its streets after the president (today's US-1, known as Truman Avenue where many Key West hotels can be found including the Chelsea House and the Conch House). Today, Truman's Little White House is open to the public as a historical site and museum and is one of the popular tourist destination in Key West Florida along with the nearby Hemingway House.

During Truman's presidency, future president and current General Dwight D. Eisenhower visited the Little White House for work. Between 1948 and 1949, he had a series of meetings with important heads of the US military where they collectively created the Department of Defense. When it was Eisenhower's time to be president, he used the Little White House to recover from a heart attack, similar to the way Truman first visited to recover from exhaustion caused by his first 19 months as president.

Other Presidents in Key West

Before the Little White House in Key West Florida was deeded over to the state of Florida and turned into a museum, several other US presidents made use of the property for various reasons. John F. Kennedy spent a month in the little White House after the Cuban Missile Crisis was resolved and Jimmy Carter had a family reunion on the property shortly after the end of his presidency.