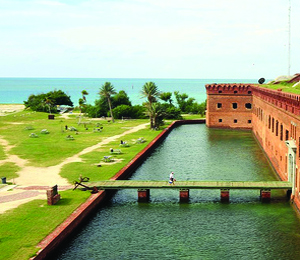 Things You May Not Know About The Dry Tortugas

The Dry Tortugas are a small chain of seven islands located in the Caribbean about 70 miles west of Key West. The island chain is incorporated into Monroe County and has a current population of zero. The Dry Tortugas, and the attractions contained therein are fascinating and can easily consume an entire day of your vacation. From visiting the lighthouses to dropping by Fort Jefferson to visiting lighted shoals that were at one time islands, there is much to do and it is only about 2 hours from Key West.

However, it is always good to know a little history about any place to which you will be traveling, and the Dry Tortugas are no different. This article examines three things you may not know about the Dry Tortugas.

Fort Jefferson is a massive structure. When it was built, it effectively doubled the size of the island upon which it sits. Fort Jefferson, which is built upon Garden Key in the Dry Tortugas, contains over 16 million bricks. This makes it the largest masonry structure in the Western Hemisphere. Fort Jefferson is currently a ghost town, but in its heyday during the Civil War, it not only housed prisoners of war including four men convicted as co-conspirators in the plot to assassinate Abraham Lincoln but also soldiers and their families.

You can visit Fort Jefferson -- a once lively military installation that is now quiet and eerie after well over 100 years of decommission. At Best on Key West, we are premiere providers of guided trips through Fort Jefferson. If you have an interest in history, we are here to help.

The Phantom Lights Of The Dry Tortugas

There are many former and disappearing islands located in and around the area of the Dry Tortugas and Fort Jefferson. Many of these islands disappeared in 1875. However, during a guided tour of the Dry Tortugas, it is quite possible to be shown where some of the former islands rest and upon which the Iowa Rock and Pulaski Shoal, two small lit navigational buoys, once stood.

Need more help finding Key West attractions? From scuba diving in Key West to Key West inns to Key West snorkeling adventures, we have the resources and connections to make your stay in the US's southern most city fun without breaking the bank.

Not staying in Key West? We can help you find vacations in many other exotic locations. From fishing in Cabo to swimming with dolphins, Bahamas, Best on Key West is here to help.