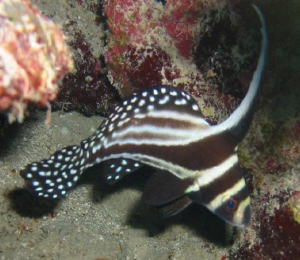 For many people, summer months bring the opportunity to take some time off and go on vacation. While sun bathing at the beach can be relaxing and fun, snorkeling is a great way to spend time in the water. This wonderful underwater activity is both physical and educational, providing vacationers with the ability to find beautiful and exotic fish and other sea creatures. One such fish is the Spotted Drum, a popular fish found when snorkeling in the tropical waters of the Atlantic Ocean. The Spotted Drum is a beautiful fish that is often sought out by vacationers partaking in Key West snorkeling.

About The Spotted Drum

The Spotted Drum, also known as the Spotted Ribbonfish, is not a large fish, but it has a beautiful color. When these fish are young, they actually have no spots, but are instead covered with long white stripes. Its main colors are black and white, with long stripes across the front of its body, and spots on its fins in adulthood. This fish grows to about 18 centimeters long. Its relatively small size can make it a challenge to spot, but its unique color pattern make it distinct. The recognizable spots are where the fish gets its name, Spotted Drum. It is called a drum because it can make a low, resonant sound, similar to the beating of a drum, as a form of communication. The name Spotted Ribbonfish has obvious origins, as the long white and black stripes that precede the spots look like ribbons. The beautiful colors and patterns on this fish make it a popular find for Key West snorkelers.

Where to See The Spotted Drum

While this fish is typically nocturnal and feeds mostly at night time, finding the Spotted Drum is not an impossible task; it can, in fact, be a fun and easy experience. This fish is fairly common in the warm Key West waters, where it lives and feeds. It can be seen by snorkelers during the sunny days swimming in a repetitive pattern near the mouth of caves or near underwater ledges. It frequently swims at a depth of about three meters. This depth, less than ten feet, is easily accessible for most snorkelers and is not too difficult for most people to reach. This fish is easy to find and wonderful to look at.

The Spotted Drum is a frequently seen fish in Key West snorkeling. Despite its common appearances, it is still a favorite among tour guides and vacationers alike. Seen among the reef, the long, curved fins of the juvenile Spotted Drum and the unique patterns found on the adult fish make it one of the most beautiful and popular creatures in the Atlantic.