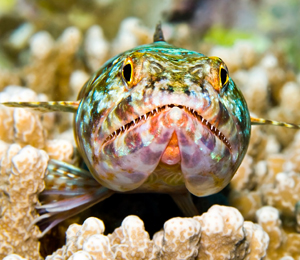 The Sand Diver of Key West

Sand Divers have the scientific name of Synodus intermedius and are a member of the lizardfish family. They also go by the common names of Sanddiver Lizardfish, Intermediate Lizardfish and Filamented Sand Dragon. They typically grow to around 14 inches long, although longer ones have been documented. These tropical, salt-water fish get their name from the lizard-like appearance of their head and face. Their natural coloring is a cream-colored body covered in dark brown spots. However, they can readily change colors to help them hide from predators and to disguise themselves while hunting prey. The Sand Diver is often confused with other lizardfish varieties. An accurate identification can usually be achieved by looking for a dark spot on top of the gills.

Sand Divers are lone fish that are rarely found in pairs, unless they are mating. They swim mostly in shallow reefs and rocky areas with sandy bottoms. They are abundant in the Western Atlantic, the Gulf of Mexico and the Caribbean. Key West snorkeling adventurers are sure to spot this intriguing fish, if they look carefully. They are often found in shallow water that is between 3 and 25 feet deep, but can live at depths of up to 320 meters. They can also be found by looking under, or near, large underwater boulders. In some cases, Sand Divers sit directly on top of rocks or reefs.

These bottom dwellers are experts at camouflage. They can burrow into the sand, using their pectoral fins, until only their eyes or the top of the head is visible. They can also change their coloring to adapt to their environment and lie perfectly still while waiting for pretty to come along. They have a wide color range from a very pale white to a colorful red or brown. This exceptional camouflage technique makes them difficult to spot. It’s not unusual for groups of divers to swim over a Sand Diver fish and not even notice that it is there.

The Sand Divers diet consists of tiny fish, shrimp, crabs and other invertebrates that live along the bottom of the ocean. They have hinged jaws with multiple rows of tiny, needle-like teeth. When prey comes within reach of a Sand Diver, they lurch up from the sand and grasp it in their teeth.

One of the most entertaining activities to perform while Key West snorkeling is to gently fan water toward a Sand Diver to make it move. The fish typically only moves a few feet, which allows you to watch them burrow. Watch for a moment more and you will see it gradually change color to adapt to the new location.