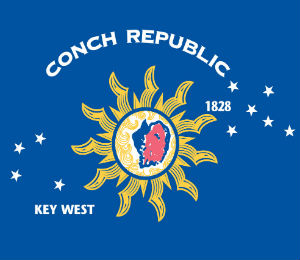 The History Behind the Conch Republic

On April 23, 1982 Denis Wardlow, the Prime Minister of Key West, declared that the people of Key West should succeed from the United States. The reason behind the succession was because the United States was planning to put up a border patrol check point on the only road accessible for those who wish to leave the Keys. The Keys is very dependent upon this road since it is the only way to come in and out of the Keys, so out of concern for their economy they decided to succeed from the United States. The new country was declared the "Conch Republic"; a new flag was made and federal officials were being beaten by locals with stale bread. The patrol block was removed by the Federal government in response, however the succession was never officially recognized by the United States government.

So, why did the people of Key West choose the name Conch Republic? For years, those born and raised in Key West have been referred to as "Conchs." Where the name originates historically is under speculation, however there are several suggestions as to where the name comes from. Some say that many people from the Bahamas came to Key West, who already had earned the nickname "conchs" because they ate so much conch. Some say that the people of Key West ate so much conch that they just received the nickname as well. Others say it was the ubiquitous use of the conch shell by the people of the Bahamas and Florida during the 18th century that led to the nickname "conchs."

No matter where the name comes from, Key West has become pseudonymous with "conchs" and the "Conch Republic." Visitors who come for Key West vacations often hear this term, especially if they are talking to a local. However there is more tradition linked to this the use of the word "conch" than realized. For example, after a certain amount of time, newly transplanted people to Key West are often referred to as "fresh water conchs." This term is normally applied to them after seven years. The term "fresh water conchs" is used to distinguish them from "salt-water conchs," which are people who were born an raised in Key West. For more information, please be sure to visit Key West for yourself and ask a local about the term "conch" and the "Conch Republic"!