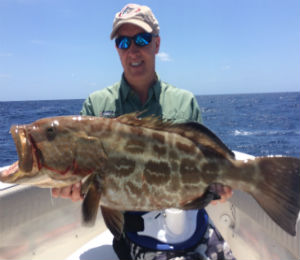 The fact that Key West, Florida, is the geographic point where the Atlantic Ocean and the Caribbean Sea intersect makes this the ideal place for a chance encounter with a goliath grouper during a Key West snorkeling tour.

The Eprinephelus itajara or goliath grouper is the largest member of the Atlantic grouper family. This phenomenal saltwater fish averages 10 feet in length and a weight of 790 pounds. Coral and artificial reefs at depths ranging from 16 to 165 feet appear to be their favorite haven of safety.

The goliath grouper ranges in coloring from dull green to dark yellow and features minute dark spots on its head and fins. There is also an interesingly unique pattern of dark vertical sidebar stripes evenly spaced across the torso. These fish are believed to rely on small crustaceans, sharks, sea turtles and barracuda as their primary food source.

For many years, goliath grouper terminology included the name jewfish; however recently the American Fisheries Society has discontinued and discourages its usage having deemed jewfish to have racially offensive connotations.

Among the wealth of interesting facts associated with the goliath grouper is that they are predominantly female until maturity whereupon females appear to have the capability to transform into males if they deem the male population to be small during spawning season.

Once laid, the eggs rise to the surface where they float for 40 to 60 days. When hatched, the goliaths descend to the ocean floor where they remain for four to six years sheltered by sea grasses and mangrove growth.

Part of the goliath grouper's hygienic habits is to allow small one-inch long neon goby fish to feast on their dead scales and any parasites found on their body.

Prior to the catch-keep fishing ban instituted by the International Union for the Conservation of Nature that was adopted by the U.S., in 1990 and by Caribbean nations in 1993, the goliath grouper population was estimated to have experienced a 90 percent decline over a perior of 40 years to the point that the remaining 10 percent now occupy a prominent place on the endangered marine life listings. A great portion of the decline is attributed to the fact that goliaths are curious by nature. Since they do not seem to shun human contact, they are a prime target for death by fishing spear.

During the late summer spawning season in September 2007, there was an upsurge of reports relative to the killing of goliaths by spearfishing enthusiasts off the shoreline of Jupiter, Florida in an area known as Bonaire/Zion Train Wreck. Tragically, five goliaths met their demise during this time period with at least one individual found to have anonymously posted a picture of wrestling with a goliath on YouTube.

At this point in time, the world record for a hook and line captured goliath grouper is 681 pounds. This catch occurred off the coast of Florida in 1961. Ongoing efforts being waged by ORCA and Schmidt Ocean Institute under the direction of marine ecologist and biological oceanographer, Dr. Sarah Frais-Torres, the Atlantic goliath grouper appears to be making a comeback.

Following a Key West snorkeling adventure, many people have been inspired to learn more about these majestic creatures and how to ensure their survival.