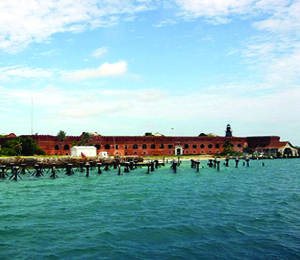 When the United States acquired Florida in 1821, pirate activity slowed. Seen as an ideal location to reinforce the security of the United States, construction began on Fort Jefferson in 1846. Construction continued for nearly 30 years, but was never fully completed. The fort was used for many different purposes throughout history, including a military installation and a prison for deserters. In 1908, the area was designated as a bird reserve and in 1935, Fort Jefferson was named a National Monument. In 1992, the Dry Tortugas National Park gained national park status.

Dry Tortugas National Park is a subtropical eco-system home to loggerhead and green sea turtles. Birdwatchers have documented nearly 300 species of birds. In the waters surrounding the island, tropical fish abound and are a favorite for Key West snorkeling. The many shipwrecks surrounding Dry Tortugas National Park provide an excellent habitat for sea life and bring many people to scuba Key West.