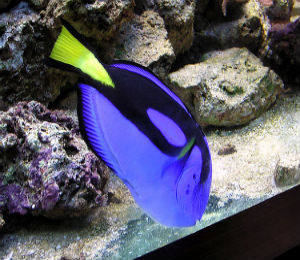 The Blue Tang is a specific species of fish that is now famed throughout the world. There are two fish species referred to as the "Blue Tang." The first, Paracanthurus hepatus, is deep blue in color with a yellow tail and a black mask. The fish's body is thin and circular. This fish was made popular from Pixar's smash hit, "Finding Nemo," as the star, Dory, is a Blue Tang. This fish is rare and found in the Indo-Pacific region of the ocean. The second, Acanthurus coeruleus, is dark blue and golden blue and native to the Atlantic Ocean. Also known as the Blue Tang, the Acanthurus coeruleus, is indigenous to the Floridian coast in particular. These two Blue Tangs are in the same family but in different genus categories. Therefore, there is often confusion when speaking of the Blue Tang.

Coloring and Origin of the Blue Tang

Blue Tang eat a diet that consists solely of algae; therefore, you will find them in high numbers in reefs. Additionally, the Blue Tang act as cleaners and healers for other fishes in the surrounding areas. They literally eat the algae straight off of the scales of other fish.

When Key West snorkeling, remember that the Blue Tang is a beautiful but dangerous fish. Although it will not maliciously harm you, as it is an herbivore with no interest in nutrients found outside of algae, the Blue Tang exposes its caudal spine when excited. Although beautiful, the caudal spine can penetrate deeply into human skin and cause painful infections to ensue.

Once in a Lifetime Opportunity

The Blue Tang are a truly mesmerizing fish that can only be seen in the Atlantic Ocean. So, while you're snorkeling in Key West, be sure to see this dazzling species. Its blue scales are nearly translucent, and the role they play in their communities is absolutely incredible. Be sure to explore a reef home to the Blue Tang, lest you miss out on a once in a lifetime opportunity.