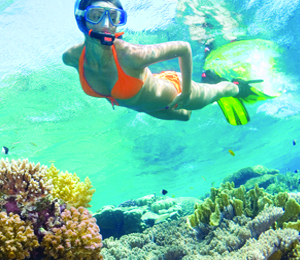 The Anatomy of the Florida Reef: Why You Should Go Snorkeling in Key West

America is one of the most geographically diverse countries in the world. From the deserts of Death Valley California, the swamps of Louisiana, the misty Blue Mountains along the Appalachian Trail, right down to the azure seas of the Florida Keys. It’s majestic, beautiful, and you could easily spend a lifetime exploring it. And if you happen to have a few days to explore your own backyard, there are a 101 reasons why Key West should be your next stop, but you only need one. The snorkeling in key west is second to none, and here’s why:

Out of every state in this great nation, Florida is the only one on the continent to have so many incredible coral reefs a stone’s throw from the shoreline, which means that every the most novice snorkelers can experience snorkeling in Key West at its finest. The reefs here expand all the way from Stuart on the Atlantic Coast, down to the tip of the Dry Tortugas, just west of Key West, out in the midst of the Gulf of Mexico. There are somewhere around 6,000 coral reefs found between the Dry Tortugas, extending up into Key Biscayne in the Florida Keys. The reefs came into being somewhere between 5,000 - 7,000 years ago during an Ice Age. How amazing is it to have the opportunity to snorkel along a reef that’s so old, and took over 1,000 years to develop.

While you’re taking any number of snorkeling trips from Key West, your divemaster or snorkeling in Key West guide will tell you a bit about the reef so you can appreciate what it is you’re looking at when you get down there. The major components of the reef are the stony corals. The living parts of the coral, the polyps, are actually made up of calcium and seawater. This creates calcium carbonate, later forming a limestone foundation that eventually becomes the foundation for the reef. These coral polyps form colonies and each colony grows up to 7 inches per year, depending on the species.

This delicate underwater biosphere is actually classified as a series of living animals. Clusters of microscopic plants thrive off the myriad animal tissues, other animals in turn benefit from the photosynthesis process. Because of this, snorkeling in Key West not only gives you the opportunity to snorkel one of the most extensive and largest reef systems in the world, but it will help you to appreciate the importance of conservation.

Snorkeling in Key West is one of those must-have activities for anyone who comes down here. Novices love that they can explore a live reef so close to shore, intermediates love that myriad marine life they’ll encounter along the way, and the experts love the challenges involved with diving a reef in the middle of the Gulf. There are a number of Key West snorkeling excursions available, all you have to do is decide how much time you want to spend out on the water. Whether you’re here for a few days, or here to explore some of the dive sites beyond the reef, snorkeling in Key West is definitely something to write home about.