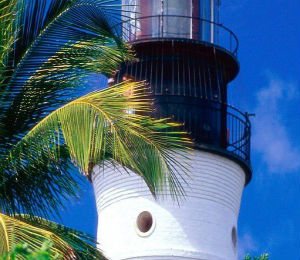 Key West's historic site called "The Lighthouse" originally began as a 65 foot tall tower that was constructed way back in 1825. The Lighthouse was constructed after the U.S. Navy built a base in Key West in 1823 and decided that its ships as well as commercial vessels would be much safer if there was a lighthouse in place for increased visibility. Key West's shallow waters have plenty of sharp reef, so it was evident that a lighthouse would be necessary to ensure safe travel on the waters. The Key West Lighthouse originally had 15 lamps with reflectors over a foot in size. The Lighthouse's first keeper was Michael Mabrity. He acted as keeper for 7 years until his death in 1832 when his widow, Barbara, took over for the next 32 years. This was very uncommon for the time period. The position of lighthouse keeper was almost always exclusively held by men.

The Rebuilding and Decommissioning

Unfortunately, a hurricane hit the area in 1846 known as the Great Havana. It destroyed the Key West Lighthouse. The next Key West Lighthouse tower was built in 1848, standing at 50 feet with 13 lamps and nearly 2 foot long reflectors. Three more feet were added to the lantern in 1873 after some more damage from another hurricane. Then, it was raised another 20 feet in 1894 so that the light could stand 100 feet above sea level. The Third Order Fresnel Lens was also installed during an upgrade so that the building's light could shine brightly across greater distances. By the late 1960s, there was no longer a need for a light keeper due to advances in technology. In 1969, the Coast Guard decommissioned the Lighthouse and Monroe County absorbed control. Monroe County then leased the building to the Key West Arts and Historical Society for preservation and to make it available to the public.

Why The Key West Lighthouse Is Worth Visiting Today

Today, the Key West Arts and Historical Society operates the Key West Lighthouse along with its associated buildings. This is all known as the Key West Light House and Keeper's Quarters Museum. Those who visit Key West should be aware that there is more to the site than just an 88 step climb to the top of the tall, cylindrical building with a light at its top. The Keeper's Quarters Museum has several interesting pieces that encapsulate the area's maritime heritage including the Sombrero Key and the first order Fresnel lens. Those who visit Key West and take a trip to the famous Lighthouse will find that its keepers are glorified through several exhibits, keepsakes, photographs, quotes and stories that describe their backgrounds and the lengths that they went to to keep the light burning during extreme weather and the threat of attacks.