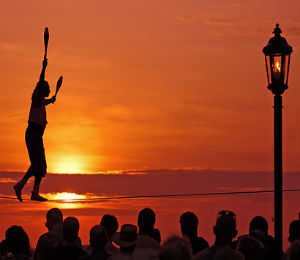 Anyone who visits Key West will want to spend at least one sunset at Mallory Square. This is the famous location where people gather every night to watch the sun go down. It’s more than a scenic spot, it’s a historic site where both locals and tourists celebrate Key West’s unique culture. While it’s not hard to find things to do in Key West, Mallory Square is one of the most iconic places in the region.

Mallory Square has been at the center of Key West’s cultural and social scene for many centuries. It was originally a favorite anchorage for pirates. In the 19th century, it became the spot where Commodore Porter based his anti-pirate campaigns. Famous salvager Asa Tift stored the goods he recovered from shipwrecks in warehouses. You can discover some of these artifacts today at the nearby Key West Shipwreck Museum. In addition to displaying many fascinating relics from ships, this museum has a 65 foot tower that guests can climb for superlative views. Mallory Square was also the spot where town residents would traditionally gather to socialize and to buy and sell items.

The official gatherings, however, began in the late 1960s. By the 1970s and 80s, the sunset festival began to become a large and well known event. Vendors and street performers began to see it as an opportunity to earn money from the celebrants. In 1984, the area became protected by a newly formed legal entity, the Key West Cultural Preservation Society. This organization now manages Mallory Square and takes measures to preserve its unique characteristics. Today Mallory Square is one of Key West’s premier tourist attractions, with shops, restaurants, museums and street performers to entertain people all year round. It is, however, most famous for its nightly gatherings of people who come to watch the glorious sunsets. This scenic waterfront spot is a natural place for this activity, and people have undoubtedly admired the sunsets here for centuries.

Today, Mallory Square is one of Key West’s major attractions. People seeking things to do in Key West may spend the day exploring the town’s many shops, museums, beaches and Duval Street, the town’s main drag. As night approaches, however, nothing is more popular than Mallory Square. As the sun begins its descent, people listen to local musicians and watch the antics of jugglers, magicians, artists and clowns. Food is sold by vendors. The scene at Mallory Square is a kind of daily street festival. Due to Key West’s mild and sunny climate, this is an event that occurs every day of the year. The area also has many popular bars and restaurants, which people often frequent after sunset.