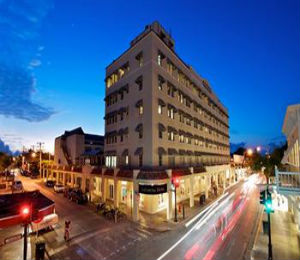 There are lots of fun and fascinating things to do in Key West, and one of them is a stop at the historic La Concha Hotel.

Key West wasn't visited much until it was connected to the mainland by Henry Flagler's Florida East Coast Railway in 1912. Then the sunny climate and relaxed pace began to attract tourists. So developer Carl Aubuchon opened the La Concha in 1926. It was seven stories tall with 160 rooms, and, with private baths, marble floors and an elevator, it was considered one of the finest hotels of its time. After 1927 Cubans began to arrive by ship, and the hotel became even more popular.

Many famous people have stayed at the La Concha. President Truman and Al Capone both stayed there. Tennessee Williams wrote A Streetcar Named Desire while he was there. But the most famous literary guest is also very much identified with Key West. Ernest Hemingway started his 1937 novel To Have and Have Not at the La Concha, and described the hotel this way: "I could see...the La Concha Hotel up high out of all the low houses." Hemingway had moved to Key West with his second wife, but soon began an affair with another woman in his suite at the hotel. Hemingway lived in the La Concha on and off in the 1930's, and often spent a relaxing evening drinking at the hotel's rooftop restaurant.

The La Concha has had its share of challenges over the years. In 1935 a hurricane destroyed the railway line to Key West, cutting off access except by boat. The hotel managed to stay open until the federal government completed an oversea highway to Key West in 1938. But in the following decades, competition from more modern hotels ate away at the La Concha's fortunes. By 1982 the hotel's rooms were boarded up and only the rooftop restaurant was open.

Fortunately, there was interest in re-opening the La Concha, and architect Richard Rauh restored it, going by old photographs and memories of older Key West residents. The hotel was back in business in 1986, with modern conveniences but a nostalgic look of the past. The dining room is decorated to look like it did in the 1930's, when Hemingway was there.

The look may not be the only thing of the past that hangs around the La Concha. Spirits are said to inhabit its halls. One is reported to be a waiter who fell to his death from the 5th floor in an elevator shaft. Another is a lawyer who committed suicide after being caught embezzling funds. Employees and guests claim to see shadowy figures in the halls, and feel cold drafts. The most famous ghost there is Ernest Hemingway, who likes to play tricks on people, such as hiding their things.

Among the many things to do in Key West, a visit to the La Concha Hotel has beauty, nostalgia, and maybe some history that won't go away.