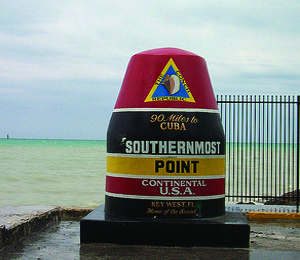 In addition to the dozens of Key West tours and activities that get you out on the waters or let you explore the historic hot spots of downtown, the southernmost island of Key West Florida offers its visitors excellent events any time of the year. Key West has long been one of Florida's cultural hubs, bringing together locals and visitors of all walks of life and from all over the world. During your visit to Key West, make sure you take the time to participate in some of the unique Key West events that take place throughout the island. March is the heart of peak season in Key West, with thousands of visitors descending on the island and filling up the many Key West hotels every day. When not hanging out at the bars, enjoying the great food at Key West restaurants, or exploring the coral reef on a snorkeling trip, try to check out some of these great Key West events taking place this upcoming March.

Two great plays will be taking place during march in Key West. The first of these is the Tony award-winning one-woman show Shirley Valentine starring local actress Joan O'Dowd. The play is a comedy about a woman living a mundane life who takes the opportunity to travel to Greece. The results are hilarious and insightful. Shirley Valentine is showing from February 24th through March 27th at the Red Barn Theatre right in the heart of Downtown Key West and on famous Duval Street. Just a few blocks away, also in the downtown Key West, the smash hit The Full Monty will be happening at the Waterfront Playhouse from February 25th through March 20th. This play, which also became a popular movie, tells the story of six steelworkers who find themselves unemployed and come up with an ingenuous plan to make some money. After witnessing their wives' reaction to a performance by strip sensation the Chippendale Dancers, the men decide to put on their own version of a striptease performance. Another fantastic cultural event taking place in March is the popular Cuban Cultural Exposition & Hot Havana Nights, happening this year from March 7th through March 13th. The week-long event celebrates the culture, art, and music of Cuba and features authentic Cuban cuisine, original Cuban art, live auctions, and live music. The main event and live performance takes place on March 13th with general admission tickets going for $100 a piece (but we hear it's well worth it!).

The main plants and gardening event that will be taking place this March is the 50th Annual Key West House & Garden Tours. The tour is meant to showcase some of Key West's most unique homes and gardens that are not typically open to the public. This year, five of the most elegant and expertly designed homes on the island will be featured as part of the event, which takes place on March 12th and 13th. Participants in the event will be able to take a sneak peak at 5 of Key West's most charming and tropically-landscaped private residences. Proceeds of this event go to help benefit the Old Island Restoration Foundation which focuses on preserving the historic and natural beauty of Key West. Another plant-related event in March is Migration Mania which takes place from March 1st through April 30th at the Key West Botanical Gardens. The two-month-long event features exciting animal shows, bird tours, and plant tours with plant and animal life from all over the world. This event is great for anyone who is interested in learning more about some of the most unique and exotic plant and animal species throughout the world.

March is the start of the biggest and most important Key West fishing tournament of them all, the aptly-named Key West Fishing Tournament. The tournament lasts a full 8-and-a-half months and anglers of all ages, experience levels, and backgrounds compete for a variety of titles and awards. Over 40 species of fish that populate the waters of Key West are targeted throughout the event. Many anglers participate in this event each year and in November the results are announced and awards are distributed. The kick-off event for the Key West Fishing Tournament takes place from March 12th through March 14th.