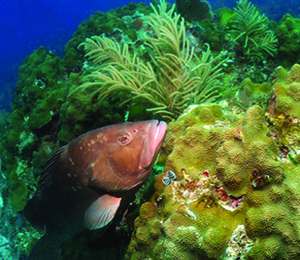 The coral reef system that surrounds the tiny island of Key West is part of a larger reef system that stretches from Stuart, Florida down to the Dry Tortugas. The reef system includes a variety of types of reefs. Down in Key West, the type of reefs are mainly the fringe reefs that are directly attached to a shore. The coral reef garden down here is also one of the only living coral reef in the continental United States.

Coral reefs are a type of aragonite structure (created by carbonate material) that is produced by microscopic organisms called polyps. The polyps create a hard skeleton to protect their bodies that become the solid structures of the reefs. If undisturbed by man or other forces, coral reefs can grow to be massive, as they typically grow half an inch per year. The Great Barrier Reef, for instance, has grown to be 93 miles wide by 1,242 miles long. The reef in Key West is not as large, but it provides the rich and colorful diversity of the largest of reefs. Reefs grow best in the types of waters that surround Key West: sunny, clear and shallow salt water. The reefs also grow best in nutrient-low territories. This partly means that humans who snorkel and dive in the reef must be careful to not touch the reefs, as this could potentially damage their growth and existence by introducing nutrients into their ecosystem.

Despite its low-nutrient conditions, the coral reef supports an impressive amount of biodiversity, including all kinds of corals, reef fish, and many other species of fish and sea animals. In Key West, you will find all kinds of hard and soft coral, sponges, snails, jelly fish, sea anemones, crabs, lobsters, rays, sea turtles, nurse sharks, and all the smaller reef fish like parrotfish and angelfish. The best and probably most life-abundant coral reef near Key West is out on the Dry Tortugas National Park. The Dry Tortugas is a group of small islands located about 70 miles west of Key West. Despite their remoteness and lack of habitability for humans, the islands have served a unique role in American history. The islands are basically a part of the reef system and thus, unlike in other areas of the keys, you can simply swim out to the reefs as they are only feet away from the shore.

Other ways to get out to the reef is through one of the several snorkeling and diving trips provided on Key West. Most of the trips have knowledgeable and experienced captains that know the best places to go out on the ocean for snorkelers to get the most out of their trips. Some trips offer larger excursions with 40 and sometimes even 75 snorkelers aboard the boat. The Glass Reef boat is a smaller boat that takes only six people out to, first, the dolphin playground and then the coral reef.

The coral reef ecosystem is very delicate and fragile. Human activity such as coral mining, pollution, over-fishing and canal-digging has been the most serious threats to the reef systems. Snorkelers love to see the coral reef and swim above it as they marvel at the sights and colors of the reef, but they must also do their part to help the reef by not touching them with any part of their body or with their fins. Snorkelers should be aware of the depth of water they are swimming in so that when they decide to upright themselves, they are not stepping or touching reef with their feet. By being cautious with the corals, we are preserving this area for generations to come.