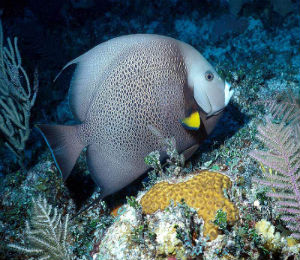 Anyone who has ever been to an aquarium has probably seen angelfish of some variety, but you've never seen them like this! When you go on a Key West snorkeling trip you'll be able to see and experience the beauty and elegance of angelfish up close and personal.

There are over 100 different species and varieties of angelfish that live in the Southern hemisphere. While some of these species live in the fresh waters of lakes and streams, many of them inhabit oceans, and are known as marine angelfish or saltwater angelfish. These are the varieties you'll be able to see on our excursions.

The angelfish is known for its beautiful and vibrant coloring. While there are slight variations between the different types, you'll usually be able to identify an angel fish by their vibrant color schemes and oblong or triangular shape. The long, almost ribbon-like dorsal fins - sticking out like a spike or ribbon on the back of the fish's upper half, and often extending beyond its tail fin - are one of the signature elements of angelfish of all varieties. When it comes to colors, you can get any combination and all colors of the rainbow. Two of the more well known and more easily recognized varieties are the Queen Angelfish, known for its vibrant two-tone blue and yellow coloring, and the Emperor Angelfish, known for its blue, yellow, and black striped pattern.

While the angelfish species you've seen in aquariums or even pet stores are relatively small (usually only growing to be 6-8 inches long), those in the wild and unlimited by the confines of a tank's walls are able to grow up to a full foot long. Unlike many other fish species you'll encounter during your Key West snorkeling expedition, angelfish are unlikely to try and flee when you approach. To the contrary, these fish are notorious for their almost fearless disposition, often approaching divers and snorkelers, and swimming within an arm's reach or closer.

Marine angelfish feed on algae of all varieties. Large quantities of this tend to grow in and around coral reefs, so these are a good place to spot them. While some fish are seen in large schools, most angelfish species are more secluded. They'll either travel in pairs or small clusters. If you see a pair, it's most likely a tightly knit monogamous mating pair with one male and one female. The groups that are larger are comprised of one male and several females, a sort of marine harem with which the male will mate and over which he will maintain control.

The varieties of angelfish you'll see in saltwater environments are shallow water swimmers. They tend to avoid deeper areas, and usually can be found within the top 40 meters of the ocean. Because of their refusal to venture to depths beyond 70 meters, you'll be likely to catch glimpses of their brightly swimming bodies without having to go very far. Shallow water swimmers like these are often the most easily and first encountered fish on any diving or snorkeling expedition you'll take, and their beauty will be absolutely breathtaking from the first glimpse right up until you have to reluctantly get out of the water.