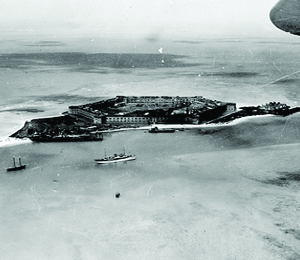 When Ponce DeLeon discovered the islands 70 miles west of Key West in 1513, he named them the "Dry Tortugas." "Dry" because he found no fresh water and "Tortugas" because of the abundance of sea turtles that provided food for his crew. In the 1600s and 1700s, the Dry Tortugas were used as a base for pirates capturing merchant ships, but in the mid 1800s, that all began to change as the United States acquired Florida and Fort Jefferson was constructed.

The Beginnings Of Fort Jefferson

When Florida became part of the United States in 1821, there was a concerted effort to stop pirate activity in the Dry Tortugas. The islands were seen as a perfect location to reinforce the United State's security and provide an "advance post" for Gulf Coast defense. For 17 years, engineering studies and bureaucratic red tape stalled any construction, but in 1846, the project moved forward. On Garden Key, the United States began construction of Fort Jefferson.

Fort Jefferson was designed as a massive gun platform. Heavily fortified, the fort was believed to be impervious to assault and was equipped with guns so powerful it could destroy any enemy ships that neared its borders. Inside the brick walls, the fort included living quarters for soldiers and the necessary support to maintain the fort. As weaponry advanced, however, Fort Jefferson became obsolete for its original purposes.

Construction continued for nearly 30 years, but Fort Jefferson was never fully completed. However, the fort served many important purposes throughout the building process.

During the Civil War, Fort Jefferson served as a prison, primarily for military deserters. During this time, Fort Jefferson population peaked at around 1,800 people. With the conclusion of the war, the population declined and only about 1,000 soldiers and prisoners remained. Fort Jefferson did serve as home to four famous civilian prisoners who were convicted in the conspiracy to assassinate President Abraham Lincoln.

By 1888, the cost of maintaining Fort Jefferson along with a declining use of the fort became more of a burden than the U.S. Army was willing to carry. The Army turned Fort Jefferson over to Marine Hospital Services and it acted as a quarantine station.

In 1908, the area was designated as a bird reserve and in 1935, President Franklin D. Roosevelt visited by boat and named Fort Jefferson a National Monument. In 1992, the Dry Tortugas National Park gained national park status.

Dry Tortugas National Park and Fort Jefferson are only accessible by boat and personal watercraft is prohibited. Charters leaving Key West will take you to the island. Fort Jefferson is open from dawn until dusk. There is a $5 entry fee for Dry Tortugas National Park. Pack all the supplies you'll need, and please be respectful of this fabulous subtropical eco-system by also "packing out" anything you take with you.

Wildlife abounds in the park and it is a birders paradise. Nearly 300 bird species have been documented and you can enjoy some of the best snorkeling in Key West in the shallow waters surrounding Fort Jefferson and the rest of the Dry Tortugas National Park. Tropical fish and sea life abound. Key West scuba excursions will often find their way to the deeper waters off the park's shores where shipwrecks make a fantastic habitat for fish and sea creatures.

There are no accommodations in the park, but back in the United States most southern city, you'll have the opportunity to explore even more history if you stay in a Key West bed and breakfast or historic inn.

Love your trip to Key West? Look into another island vacation. Next time you may want to try the Bahamas. Diving and snorkeling are big draws there.