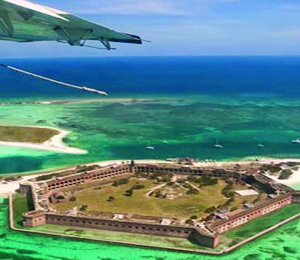 If you’ve been thinking about heading down south for a little escape, you’ve probably had your eye on Key West, and for good reason. Despite it’s size, Key West is the jumping off point for countless activities, including day trips to Dry Tortugas National Park. Located just 70 miles off the coast of Key West, Dry Tortugas National Park is home to seven of the worlds most unique islands. The islands themselves are home to myriad species found only in this region of the world, but it’s also the locale of Fort Jefferson, a fortress dating back to the 19th century, during the American Civil War. It was once home to one of America’s most notorious prisoners, Dr. Samuel Mudd, imprisoned for his alleged involvement in the assassination of President Abraham Lincoln. Sound like a place you’d like to explore further? Of course it is! Here are 5 reasons why you should visit Dry Tortugas National Park:

You Can Camp Out!

How many times do you get the opportunity to sleep under the stars, alongside a 19th century fortress? If that isn’t something to cross off on the ‘ol bucket list, what is? But before you get too excited, you should know the camping facilities here are minimal. Everything and anything you think you’ll need (including fresh water), you have to pack with you. Be sure to be at the ferry dock no later than 6:30am because camping out in Dry Tortugas National Park is one of the most popular activities.

You already know that the snorkeling off the coast of Key West is world class, but the snorkeling in Dry Tortugas National Park is about to give the Keys a run for their money. Home to some of the world’s most vibrant reefs, and the healthiest reef in America, snorkeling is a must do activity. A unique feature of these reefs is that some of them are so easily accessible, even the most novice of snorkelers can wade out into the shallows and enjoy the reef.

Dry Tortugas National Park is an oasis for bird watchers, and it’s why nature enthusiasts flock in droves to the Dry Tortugas annually. You may be amazed to know that nearly 300 different species of birds thrive and migrate to and from these 7 small islands. Spring is the best possible season to bird watching, but realistically, those visitors who come between the months of February and September become spectators to one of the most awe-inspiring spectacles anywhere on earth. You’ll want to bring your best camera, and don’t forget the telephoto lens, because you’ll find birds here that you may never see anywhere else on the planet.

As was previously mentioned above, Dry Tortugas National Park is home Fort Jefferson, an iconic 19th century fortress and the largest stone structure in the Western Hemisphere. A team of guides live at the fortress full time and they know absolutely everything there is to know about the old fort, from every stone that was laid here, to all the prisoners that passed through it’s heavy doors. If you’re a history buff, this is definitely an attraction that you won’t want to miss.