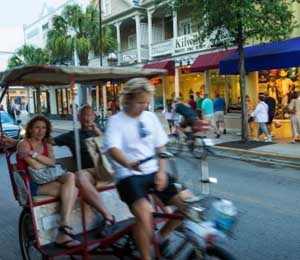 Duval Street is the only street in North America that goes from one ocean expanse to another – from the Atlantic Ocean (on the south) to the Gulf of Mexico (on the north). Even though it goes from sea to sea, Duval Street is just about a mile long.

Named for William Pope Duval, the first governor of Florida when it was a territory of Spain, the street is known for its nightlife, great restaurants, galleries and boutiques.

It’s on Duval Street that you’ll be able to see the cultural influence of Cuba. Many Cubans migrated to Key West in the late 1860s and, for a while, offered many cigar stores on Duval Street (resulting in Key West earning the nickname “Cigar City USA”).

The street also offers visitors a great chance to view large Victorian and Bahamian mansions and bungalows on its north end – the more residential end. Visit Duval Street on the south (Atlantic) end and it’s there that you’ll find the buoy marker for what is touted as the southernmost spot in the United States.

The National Park Service in 1967 designated 18 buildings on Duval Street as historic, adding another entire six blocks to the National Register of Historic Places in 1971. The city itself set up “Historic Architecture Guidelines” in 2000, which also sets high standards for any new construction along the street.

Mallory Square, near the street’s northern end, is considered to be the center of Key West’s waterfront; it’s the waterfront where Key West pretty much got its start.

The southern end of Duval Street can get pretty lively at night when a carnival-like ambience pops up. Sometimes known as the Duval Pub Crawl, the noise and parties sometimes can last until dawn!

It’s on Duval that some of Key West’s most famous restaurants are located, including Margaritaville (owned by singer Jimmy Buffett), Sloppy Joe’s, The Flying Monkeys Bar, the Bull and Whistle, Rick’s Café, Irish Kevin’s bar, and more.