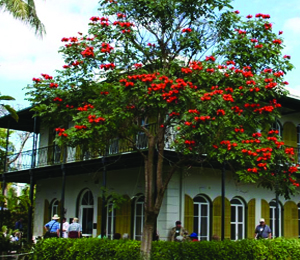 Key West Florida has a reputation for many things ranging from its pirate history to its amazing snorkeling trips to its picture-perfect sunsets to its amazing variety of bars and clubs. With its rich artistic and cultural history harking back to the first decades of the 20th century, Key West is also known as one of Florida's top cities for art and culture. This unique culture of Key West Florida is present in the art galleries scattered throughout the historic Downtown area and the many events that take place throughout the year focusing on various artistic and cultural aspects ranging from visual arts to theater to heritage festivals to food & wine festivals. Key West certainly has a love and appreciation for the arts and for its own cultural identity, and the island is eager to show its artistic and cultural side to visitors willing to explore it.

Key West has garnered somewhat of a reputation as a literary hub thanks to two highly prominent American authors who lived and wrote in the southernmost island of Key West Florida. The first of these, and also one of Key West's most famous residents, was Ernest Hemingway. Hemingway was in awe of Key West's laid-back island atmosphere complete with the streets lined with flowers and foliage and with the excellent fishing available just off the coast of the island. After renting an apartment on the island for a couple years, Hemingway and his wife Pauline purchased a large quintessentially-Key West house on 907 Whitehead Street, which today welcomes visitors to explore one of Hemingway's favorite getaway homes. Here, he wrote much of A Farewell to Arms and also met his third wife, Martha, in the famous Sloppy Joe's Bar, as legend has it.

Dance and Theater in Key West

Key West has two main theater troupes that put on productions throughout the year at several theaters throughout Key West, including the Red Barn Theater, the Tennessee Williams Theater, and the 70-year-old Waterfront Playhouse. This season has produced some of the most memorable plays in Key West that locals and visitors alike have been raving about. The latest at the Red Barn Theater, for instance, brought together two of Key West's most recognizable theater actors (Carmen Rodriguez and John Wells) on a one-night event of the heart-warming musical How Sweet It Is telling the story of rock legends Linda Ronstadt and James Taylor. Before that, the Short Span Attention Theater was produced, showcasing some of the best short plays in a variety of genres. The Waterfront Theater is currently running the musical comedy Stepping Out and earlier in the season they produced the hilarious and all-around-loved play, The Full Monty. Check the schedules for the plays currently running while you are down in Key West to try to catch some of these excellent Key West-style theater productions.

The visual arts are extremely prominent in Key West and the Florida Keys. With dozens of art galleries scattered throughout the Keys, month art walks on White Street in Key West, and several art festivals throughout the year, Key West is one of Florida's most thriving art communities. The most popular art festival in Key West is the Key West Craft Show that takes up two streets in the Old Town area of the island to set up a charming open-air gallery with all kinds of art (visual, sculpture, graphics, photography, etc) from all over the country and even from several Caribbean countries. The Sculpture Key West festival takes over three venues in downtown Key West to showcase some of the best contemporary sculptures.