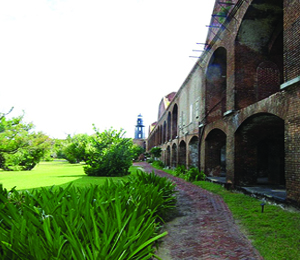 Any Fort In The Storm Fun Near Fort Jefferson

Of all of the things to do in Key West, few are as exciting as going to Fort Jefferson. Fort Jefferson is located on the island of Garden Key in the Dry Tortugas National Park, about 70 miles west of the coast of Key West. The island chain is home to 7 islands and is all together about 100 square miles.

However, those 100 square miles can pack a punch. Even though the island is not inhabited and is secluded and hidden away from civilization, there are still a few great attractions to be found. For fans of history, the military, or architecture, there is something for you here. And if you are a fan of the nation's National Park system, the Dry Tortugas National Park is possibly the most out of the way member of the club.

If you decide to make the 2 hour boat trek from Key West, you are going to want to have an idea of what you will do once you arrive at the Dry Tortugas. At Best On Key West, we have a few ideas on how to enjoy your trip to this deserted island chain. Here are 3 of our favorite hot spots on the chain.

Fort Jefferson will forever be known as a sort of failed showing of American industrial strength. It was conceived out of necessity with the annexation of Florida because we needed a way to guard her coast and waterways from pirates and those who may attack. However, its execution was somewhat flawed.

Over a 30 year span, the construction of Fort Jefferson continued. During this time, the installation swelled to a massive size. In its current unfinished state, the masonry structure, the largest in the Western Hemisphere, is comprised of over 16 million bricks.

Over its lifetime, the members of the military and their families, Civil War deserters, and federal prisoners have inhabited Fort Jefferson. Now all action has ceased and Fort Jefferson lies dormant. However, as a member of our country's National Park system, Fort Jefferson is open to visitors daily.

Snorkel Around The National Park

Key West is not complete without snorkeling and neither is a visit to Fort Jefferson. Key West snorkeling around Fort Jefferson is a great way to add some fun and adventure into a journey that would otherwise be a lot of learning and fresh air.

Going somewhere else on vacation? Well, we might be able to help still. Give us a call. We have information on activities and attractions in many other exotic locales. From fishing in Cabo to swimming with dolphins in Bahamas, the only limit to your next vacation is your imagination.